The FAO Food Price Index averaged 205.9 points in July 2013, 4 points (nearly 2 percent) below its revised value for June and 7 points (or 3.3 percent) lower than in July 2012. The decline in July, which marked the third consecutive monthly drop, was largely driven by lower international prices for grains, soy and palm oil while sugar, meat and dairy quotations were also down from the previous month.

The FAO Cereal Price Index averaged 227.7 points in July, down 8.8 points (3.7 percent) from June and as much as 33 points (or nearly 13 percent) below July last year. The sharp decline mostly reflected falling maize prices as favourable weather boosted hopes of a significant production increase in several leading maize producing countries. Wheat prices also fell but the strong pace of exports limited the decline. Rice price changes varied according to origins, with a decrease in Thai prices contrasting with higher Vietnamese quotations.

The FAO Oils/Fats Price Index averaged 191 points in July, down by 7 points (or 3.3 percent) from June and the lowest level in three years. The slide in the index mainly reflects easing quotations for both soy and palm oil. Soy oil values have fallen in response to ample export availabilities, especially in Argentina, combined with weak demand (including from the biodiesel sector), as well as good soybean crop prospects in the United States. The palm oil price weakness mainly resulted from the combination of ample production and lower than expected import demand, most notably by China. Prices for rape and sunflowerseed oil also fell, reflecting improved 2013/14 crop prospects.

The FAO Dairy Price Index averaged 236.3 points in July, a fall of 2.6 points (1.1 percent). While prices fell overall, the decline was by a smaller margin than in the previous two months as a result of tightening availabilities in Oceania and stagnating milk production amongst other exporters, principally in Europe, South America and the United States. Milk powder prices were underpinned by limited supplies but the increase was more than offset by a fall in cheese prices due to reduced import demand.

The FAO Meat Price Index averaged 173.3 points in July, more or less unchanged from the revised June level. Prices for poultry and pig meat were lower, while those of bovine and ovine meat rose. Overall, there are signs that international prices for meat are weakening in the face of reduced import demand – especially from Asian countries – reflecting production growth and, in some cases, a build-up of domestically produced meat inventories. 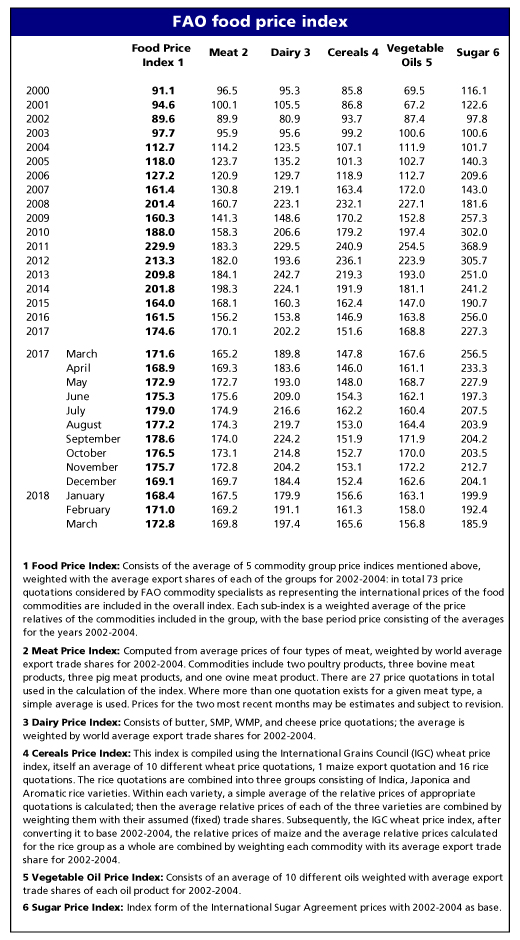 The FAO Sugar Price Index averaged 239 points in July, down 3.6 points (1.5 percent) from June. Sugar prices declined for the fourth consecutive month in July, on the back of anticipated large surplus production in major producing areas, notably in Brazil, the world’s largest sugar producer and exporter. Declining ethanol prices in Brazil also provided an incentive to convert more sugarcane into sugar instead of ethanol, which put additional downward pressure on international sugar prices.