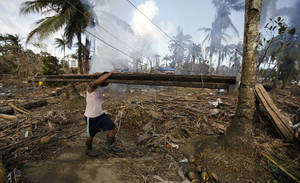 Typhoon Haiyan (locally known as Yolanda) hit the Philippines on November 8 effecting 14.16 million people. FAO has warned that an additional $11 million is needed to support typhoon-affected farmers to clear land, clean canals and ensure harvests for 2014.

Immediate assistance from the international community for Philippine farmers is critical to avoid a double tragedy befalling rural survivors of Typhoon Haiyan, FAO has announced. FAO is calling on the donor community to urgently step forward and provide more than $11 million to get money to rural people to help clean and clear agricultural land and de-silt irrigation canals in the aftermath of the devastation caused by the typhoon. Click here to read more.

The United Nations Development Programme (UNDP) is assisting local authorities in Tacloban to resume safe disposal of growing piles of municipal solid waste which has become a public health concern in the aftermath of typhoon Haiyan (Yolanda). Click here to read more.

Over 30,000 children, under 5 years of age, have been targeted in the initial phase of a vaccination campaign against measles and polio in Tacloban. Click here to read the UNICEF situation report no. 7 (pdf).