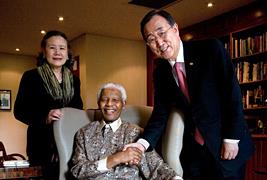 Secretary-General Ban Ki-moon has expressed his profound sadness at the passing of Nelson Mandela, extolling the life of the late human rights lawyer, prisoner of conscience, international peacemaker and first democratically-elected President of post-apartheid South Africa as an inspiration for all.

‘Madiba,’ as Mr. Mandela was affectionately known, passed this afternoon at his home in Johannesburg. He was 95.

“Nelson Mandela was a giant for justice and a down-to-earth human inspiration,” Mr. Ban said at UN Headquarters in New York.

“On behalf of the United Nations, I extend my deepest condolences to the people of South Africa and especially to Nelson Mandela’s family, and indeed our global family.”

Mr. Ban noted that many people worldwide were greatly influenced by Mr. Mandela’s selfless struggle for human dignity, equality and freedom. “He touched our lives in deeply personal ways. At the same time, no one did more in our time to advance the values and aspirations of the United Nations.”

“Nelson Mandela showed what is possible for our world and within each one of us – if we believe, dream and work together for justice and humanity,” said the Secretary-General.