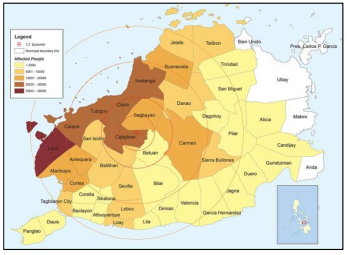 Nearly four months after a 7.2 magnitude earthquake devastated parts of Bohol Island in the Philippines, the United Nations Resident and Humanitarian Coordinator, Luiza Carvalho, is calling on donors to provide an additional US$19 million for urgent shelter needs, as well as health, education and early recovery efforts in the affected areas.

Donors have already provided $15.1 million toward humanitarians’ six-month joint action plan for Bohol covering the six months from the time of the earthquake to 15 April. The Humanitarin Country Team released its revised action plan today. “The Philippines authorities and humanitarian partners have contended with a series of disasters, including Super Typhoon Haiyan, since the 7.2 magnitude earthquake hit Bohol on 15 October last year. We are continuing to support the authorities’ efforts on many fronts and will not forget the plight of people affected in Bohol,” said Carvalho. “Local and national non-governmental organisations are playing a key role in the Bohol response, and this is reflected in the revised action plan,” said the RC/HC. “Two new national non-governmental organisations and five new local organisations have included projects in the revised plan. They all have the capacity to implement the projects in Bohol. But they urgently need funding to succeed.” Most of the nearly 368,000 people whose homes were damaged or destroyed are still living in their damaged homes or in tents nearby.

With aftershocks still common, shelter assistance is urgently needed to help people out of these unsafe conditions. People move frequently between their damaged homes and tents – depending on aftershocks and weather events. Landslides and aftershocks push them out of the house and into the tents, while flooding and heavy rains drive them back into unsafe homes. Students are back to school with almost 100 per cent attendance, but 839 classrooms are in temporary learning spaces, pending the rebuilding of structures.

The requested funding for the revised Bohol action plan is $33.8 million, compared to $46.8 million in the original plan. With the emergency now in a recovery phase, the request for funding was reduced in line with the current outstanding needs, following detailed assessments by stakeholders and consultations with the Government. Targeted support of the Bohol humanitarian actors will complement the early recovery capacities of the provincial government.