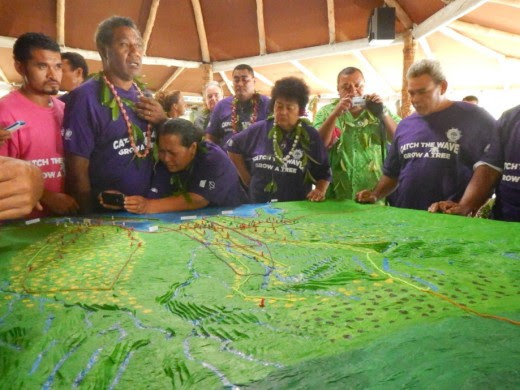 A three dimensional representation of the Safata district in South Upolu was unveiled as part of the UNDP Integration of Climate Change Risks and Resilience into Forestry Management in Samoa (ICCRIFS).

The cardboard model was made possible with the hands on assistance of representatives from the villages of Fusi, Nuusuatia and Lotofaga who attended a week long Participatory Three Dimensional (P3D) workshop at the village of Siumu. This workshop was part of the GEF project “Integrating climate change risks and resilience into the forestry sector in Samoa” (ICCRIFS) and it was conducted under the guidance of the Forestry Division of the Ministry of Natural Resources and Environment.

This participatory process allowed the villages of Fusi, Nuusuatia and Lotofaga – who are part of the Lake Lanoto’o project site, to combine map interpretation with open discussion on land use planning scenarios.  The strong engagement of young people in the construction, as well as women and elderly representatives with their understanding of their territory and traditional knowledge were remarkable along the week and shown with pride on Friday’s handover ceremony.

This is not the first time during the implementation of the ICCRIFS project that a P3D Model had been successfully completed by the villagers under the guidance and supervision of the MNRE team and the qualified experts.  Other workshops had also been held in the communities from Laulii to Falevao (North East coast of Upolu) and in Mount Salafai, in Savaii.

In all the three experiences, communities’ involvement was notable and the process efficiently identified the barriers and constraints to a more sustainable management of the forest resources.

Products used during the workshops included cardboard and paper models, representing communities and villages.  The depiction of villages is tangible, visible and carries the knowledge of their architects with them. The construction of every model also meant a learning process for the Forestry Division and will be valuable information for other projects in Samoa and in the Pacific region.

The official handover ceremony of the P3D model was the result of close and successful collaboration between UNDP and the Government of Samoa.