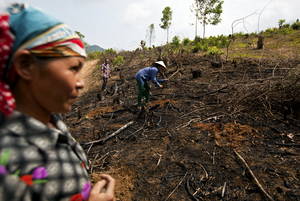 Forest loss and degradation remain major problems confronting the Asia-Pacific region which, if not addressed, will leave future generations a legacy of damaged ecosystems and irrecoverable losses of biodiversity, FAO is warning.

Forest and grasslands cover 57.5 percent of Asia-Pacific’s massive land surface and provide vital ecosystems that support agriculture and livelihoods, which in turn ensure food security and nutrition for billions of people.

These lands offer vast potential to contribute to climate change adaptation by ensuring long-term contributions to community resilience, livelihoods and poverty alleviation, while at the same time capturing mitigation benefits through carbon sequestration.

However, increased pressure from livestock production has led to serious degradation of grasslands in Asia with far-reaching consequences, including desertification and dust storms. A loss of perennial grasses and shrubs for grazing livestock can lead to the loss of pastoral livelihoods, poverty, migration and periodic scarcity of meat and dairy products.

“It’s estimated that more than two million hectares of grasslands are being degraded in Asia every year,” said Patrick Durst, FAO’s Senior Forestry Officer, adding that there are also “roughly 400 million hectares of degraded forestlands in the region that are badly in need of restoration.”

In a presentation to the 32nd FAO Regional Conference for Asia and the Pacific in Ulaanbaatar, Mongolia, Durst explained that restoring forests and grasslands can provide a range of ecosystem-derived environmental, social and economic benefits.

Over the past several years, forest and grassland restoration has captured significant international attention with a number of new initiatives and institutions emerging to promote restoration. A number of countries have also established their own national restoration programmes, and significant progress is being made, especially in forestry.

“The good news in forestry is that the Asia-Pacific region has actually increased forest cover over the past decade, thanks mainly to large-scale efforts in China, India and Viet Nam,” according to Durst. “But a much more comprehensive effort is needed across the region.”

Several factors are restraining any wider move toward more development and implementation of restoration approaches. A clearer commitment is needed by policy makers if the region is to move forward with sustainable restoration of grasslands and forests. Key drivers of change and areas of opportunity for restoration include increasing commitment and political will, payment for environmental services, improved governance, developing capacity in sustainable resource management and accessing markets.

FAO strongly promotes forest restoration and rehabilitation in Asia and the Pacific through a range of initiatives that contribute directly and indirectly to restoration objectives. Increased support to countries is possible from FAO for forest and grassland restoration, with an emphasis on enhancing community resilience, exploring opportunities for innovative financing, assisting in advocacy and awareness raising, creating enabling environments, and facilitating cross-sectoral collaboration at landscape levels.