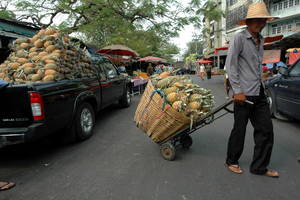 Governments from 41 countries across Asia and the Pacific have concluded a five-day regional conference on improving their responses to future food security challenges and efforts to end hunger.

At its conclusion, the Ministers and Heads of Delegations of the 32nd FAO Regional Conference for Asia and the Pacific (APRC), with some 164 delegates, endorsed four FAO regional initiatives.

The conference was hosted by the Ministry of Industry and Agriculture, Government of Mongolia.

In their final communiqué, the Government Ministers and Heads of Delegations said they were conscious of the magnitude of the challenges to achieve a food-secure Asia-Pacific region by raising agricultural productivity, in particular, the productivity of smallholder farmers, and alleviating poverty while protecting the region’s natural resources base.

The conference acknowledged that good progress had been made towards achieving Millennium Development Goal Number 1, to reduce hunger by half in the region, which could be attained by 2015 if countries redoubled their efforts and worked together in close partnership.

Speaking during the Ministerial segment of the APRC, the FAO Director-General, José Graziano da Silva, had told delegates that FAO was “working much more closely with governments, with international and regional institutions, with civil society and with the private sector to advance our goal of a food secure and sustainable world. The renewed FAO is swinging into action.”

The delegations said they recognized the positive effects and achievements of the transformational changes put in place under the leadership of the Director-General during the last biennium and noted that sustained efforts would be needed to achieve the desired outcomes.

The delegates further expressed their appreciation of the renewed efforts and actions being undertaken by the FAO through its Strategic Framework in supporting the Members.

The delegates expressed their confidence in and continued support to the new strategic direction of the organization and underline the necessity for continuity to achieve the full impact of these changes and appreciated the efforts made in support to family farming in the framework of the International Year of Family Farming 2014 and underscored that family farming constitutes an essential component of the region’s economies and societies.

In conclusion, the conference delegates reaffirmed their commitment to work hand in hand with FAO towards the achievement of the common goals and objectives and to eradicate hunger in the Asia-Pacific region.

In his closing remarks, the Assistant Director-General and Regional Representative, Hiroyuki Konuma, thanked the conference for its guidance. “The large number of recommendations adopted by the regional conference will serve as a solid foundation for FAO and the Regional Office for Asia and the Pacific in particular to formulate its future priorities, programme and actions for policy advice and technical assistance to member States.”

The Regional Conference for Asia and the Pacific serves as the highest FAO governing body at the regional level, regional conferences are essential for ensuring the effectiveness of the Organization’s work in the field and plays a critical role in defining its work priorities.