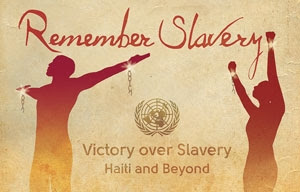 For over 400 years, more than 15 million men, women and children were the victims of the tragic transatlantic slave trade, one of the darkest chapters in human history.

Every year on 25 March, the International Day of Remembrance for the Victims of Slavery and the Transatlantic Slave Trade offers the opportunity to honour and remember those who suffered and died at the hands of the brutal slavery system. The International Day also aims at raising awareness about the dangers of racism and prejudice today.

This year’s theme, “Victory over Slavery: Haiti and Beyond” pays tribute to the fight against slavery in nations around the world. Haiti was the first nation to become independent as a result of the struggle of enslaved men and women led by Toussaint Louverture. 2014 marks 210 years since the Republic of Haiti was established on January 1, 1804.

2014 also marks the 20th anniversary of the UNESCO Slave Route Project, launched in Ouidah, Benin, in 1994, which decided to break the silence surrounding the slave trade and slavery. The project has produced multimedia educational materials, available for educators, pupils, and the general public.