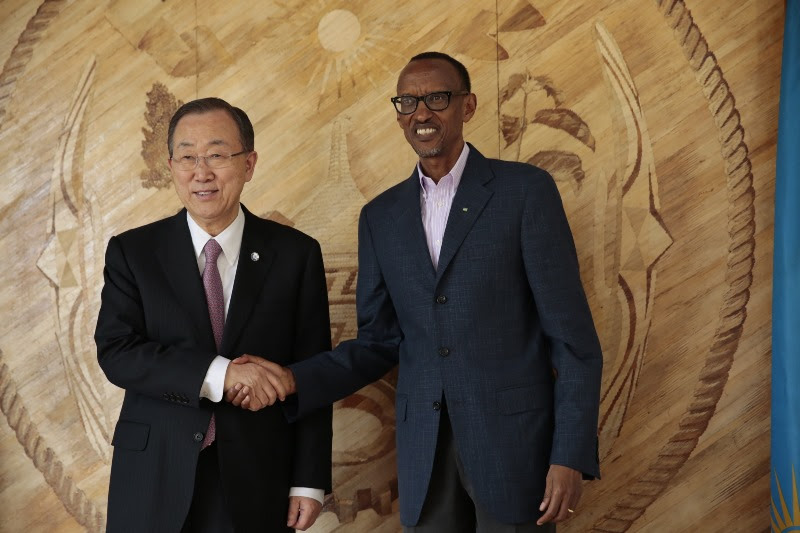 As Rwandans commemorate the genocide that took place 20 years ago, Secretary-General Ban Ki-moon stressed during a visit to Kigali on Sunday the need for the international community to learn from such atrocities and to ensure that the words ‘never again’ are translated into action.

Mr. Ban is in Rwanda to participate in the official commemoration of the genocide, during which at least 800,000 ethnic Tutsis and politically moderate Hutus were killed in 1994 during three months of bloodletting that followed the death of the then-president Juvenal Habyarimana.

Speaking at a joint press encounter today with President Paul Kagame, the Secretary-General said he would use the occasion to reaffirm the international community’s “strong commitment” to ensure that such horrors do not occur again.

“This should never happen in human history,” he told reporters, referring to the genocide. He underscored the need to use the “tragic and hard lessons” from the horrors that took place in both Rwanda in 1994 and Srebrenica in 1995 to ensure that such atrocities never happen again.

In a related op-ed published in The Independent (UK), the UN chief said that the genocides in Rwanda and Srebrenica were “emblematic failures” of the international community, and while the world has made important strides since those tragic events, more must be done.

“The international community cannot claim to care about atrocity crimes and then shrink from what it actually means to prevent them. Global leaders should do more to prevent the preventable, and to counter the cruelty taking place before our eyes,” Mr. Ban wrote.

“People everywhere should place themselves in the shoes of the vulnerable, from Syria to the Central African Republic, and ask themselves what more they can do to build a world of human rights and dignity for all. Let us show people facing dire threats that they are not alone or abandoned – and that the lifeline they need is on its way.”

Monday’s commemoration in Kigali is part of a series of events known as ‘Kwibuka 20,’ whose theme is “Remember, Unite, Renew.” The events aim to remember the people murdered in Rwanda, draw inspiration from the ability of the Rwandan people to unite and reconcile, and marvel at their determination to renew their country.