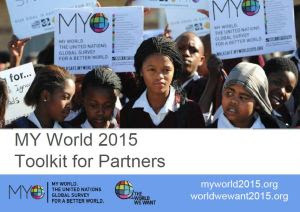 Want to become a partner and learn how to get more involved in MY World 2015 and the World We Want 2015? Download the partner toolkit today!

MY World is a global survey for citizens led by the United Nations and partners. It aims to capture people’s voices, priorities and views, so that global leaders can be informed as they begin the process of defining the new development agenda for the world.

Through creative online and offline methods, MY World asks individuals which six of sixteen possible issues they think would make the most difference to their lives. The sixteen issues have been built up from the priorities expressed by poor people in existing research and polling exercises and they cover the existing Millennium Development Goals, plus issues of sustainability, security, governance and transparency.

From now until 2015, we want as many people in as many countries as possible to be involved with MY World: citizens of all ages, genders and backgrounds, and particularly the world’s poor and marginalized communities.

Results will firstly be submitted to the Secretary General’s High Level Panel for Post-2015 before their meetings in Monrovia, Bali and New York and will feed into their final report and recommendations for a new development framework in May 2013.

After which, MY World will continue gathering people’s voices up to 2015 and results will be shared with the Secretary General and global leaders as they prepare the next development agenda in the run up to 2015.