An historic agreement to combat climate change and unleash actions and investment towards a low carbon, resilient and sustainable future was agreed by 195 nations in Paris today. The Paris Agreement for the first time brings all nations into a common cause based on their historic, current and future responsibilities.

The 1.5 degree Celsius limit is a significantly safer defense line against the worst impacts of a changing climate.

Additionally, the agreement aims to strengthen the ability to deal with the impacts of climate change.

To reach these ambitious and important goals, appropriate financial flows will be put in place, thus making stronger action by developing countries and the most vulnerable possible, in line with their own national objectives.

“The Paris Agreement allows each delegation and group of countries to go back home with their heads held high. Our collective effort is worth more than the sum of our individual effort. Our responsibility to history is immense” said Laurent Fabius, President of the COP 21 UN Climate change conference and French Foreign Minister.

The minister, his emotion showing as delegates started to rise to their feet, brought the final gavel down on the agreement to open and sustained acclamation across the plenary hall.

French President Francois Hollande told the assembled delegates: “You’ve done it, reached an ambitious agreement, a binding agreement, a universal agreement. Never will I be able to express more gratitude to a conference. You can be proud to stand before your children and grandchildren.”

UN Secretary General Ban Ki-moon said: “We have entered a new era of global cooperation on one of the most complex issues ever to confront humanity. For the first time, every country in the world has pledged to curb emissions, strengthen resilience and join in common cause to take common climate action. This is a resounding success for multilateralism.”

“Successive generations will, I am sure, mark the 12 December 2015 as a date when cooperation, vision, responsibility, a shared humanity and a care for our world took centre stage,” she said.

“I would like to acknowledge the determination, diplomacy and effort that the Government of France have injected into this remarkable moment and the governments that have supported our shared ambition since COP 17 in Durban, South Africa,” she said. 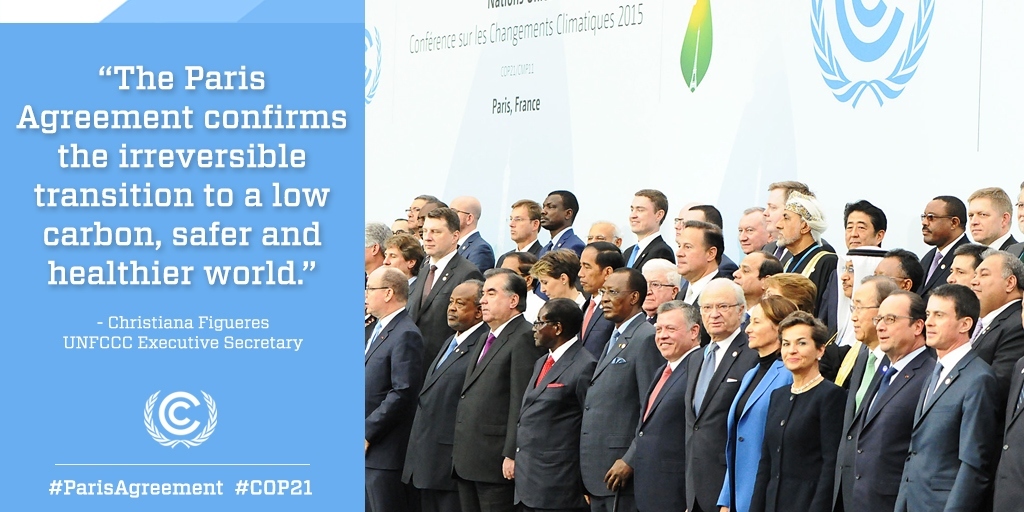 The Paris Agreement and the outcomes of the UN climate conference (COP21) cover all the crucial areas identified as essential for a landmark conclusion:

As well as setting a long-term direction, countries will peak their emissions as soon as possible and continue to submit national climate action plans that detail their future objectives to address climate change.

This builds on the momentum of the unprecedented effort which has so far seen 188 countries contribute climate action plans to the new agreement, which will dramatically slow the pace of global greenhouse gas emissions.

The new agreement also establishes the principle that future national plans will be no less ambitious than existing ones, which means these 188 climate action plans provide a firm floor and foundation for higher ambition.

Climate action will also be taken forward in the period before 2020. Countries will continue to engage in a process on mitigation opportunities and will put added focus on adaptation opportunities. Additionally, they will work to define a clear roadmap on ratcheting up climate finance to USD 100 billion by 2020

This is further underlined by the agreement’s robust transparency and accounting system, which will provide clarity on countries’ implementation efforts, with flexibility for countries’ differing capabilities.

“The Paris Agreement also sends a powerful signal to the many thousands of cities, regions, businesses and citizens across the world already committed to climate action that their vision of a low-carbon, resilient future is now the chosen course for humanity this century,” said Ms Figueres.

The Paris Agreement underwrites adequate support to developing nations and establishes a global goal to significantly strengthen adaptation to climate change through support and international cooperation.

The already broad and ambitious efforts of developing countries to build their own clean, climate-resilient futures will be supported by scaled-up finance from developed countries and voluntary contributions from other countries.

Governments decided that they will work to define a clear roadmap on ratcheting up climate finance to USD 100 billion by 2020 while also before 2025 setting a new goal on the provision of finance from the USD 100 billion floor.

Ms. Figueres said. “We have seen unparalleled announcements of financial support for both mitigation and adaptation from a multitude of sources both before and during the COP. Under the Paris Agreement, the provision of finance from multiple sources will clearly be taken to a new level, which is of critical importance to the most vulnerable.”

International cooperation on climate-safe technologies and building capacity in the developing world to address climate change are also significantly strengthened under the new agreement.

Following the adoption of the Paris Agreement by the COP (Conference of the Parties), it will be deposited at the UN in New York and be opened for one year for signature on 22 April 2016–Mother Earth Day.

The agreement will enter into force after 55 countries that account for at least 55% of global emissions have deposited their instruments of ratification.

Cities and Provinces to Companies and Investors Aligning

Today’s landmark agreement was reached against the backdrop of a remarkable groundswell of climate action by cities and regions, business and civil society.

During the week of events under the Lima to Paris Action Agenda (LPAA) at the COP, the groundswell of action by these stakeholders successfully demonstrated the powerful and irreversible course of existing climate action.

Countries at COP 21 recognised the enormous importance of these initiatives, calling for the continuation and scaling up of these actions which are entered on the UN-hosted NAZCA portal as an essential part in the rapid implementation of the Paris Agreement.

The LPAA and NAZCA have already captured climate actions and pledges covering:

Christiana Figueres said: “The recognition of actions by businesses, investors, cities and regions is one of the key outcomes of COP 21. Together with the LPAA, the groundswell of action shows that the world is on an inevitable path toward a properly sustainable, low-carbon world.”

More Details on the Paris Agreement

The COP also closed on a number of technical issues. 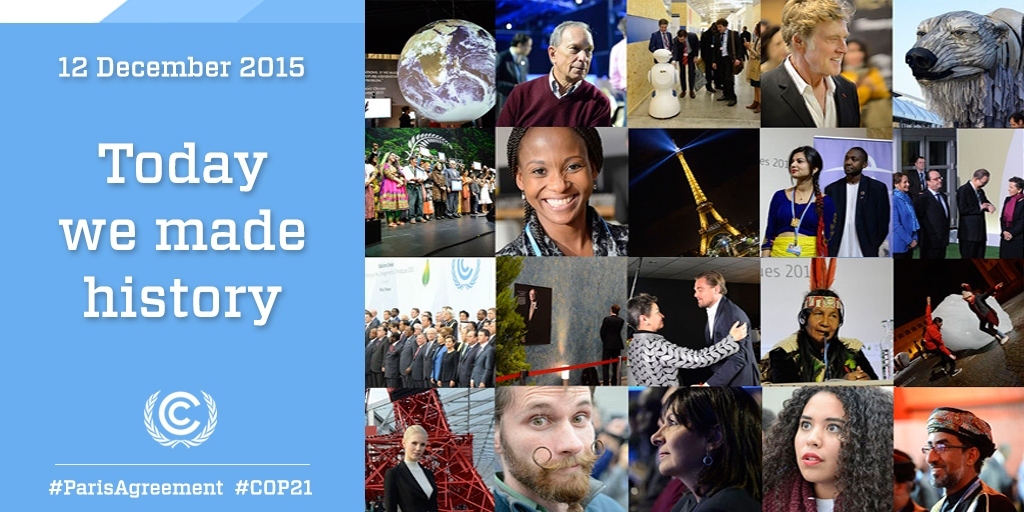